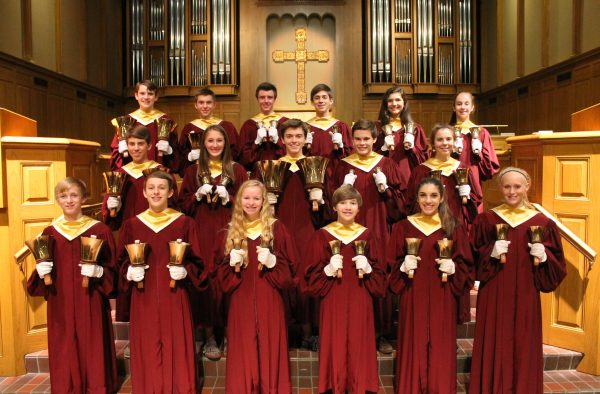 UCC Bell Ringers is a select group of young people, ages 14 – 18, from University Christian Church in Fort Worth, Texas. They ring one of the church’s three, five-octave sets of English handbells, cast by the Whitechapel Bell Foundry in London, England. The bell choirs have a long tradition of musical excellence and have been an integral part of the life of the church for many years. UCC Bell Ringers is a touring bell choir that has attended festivals throughout the United States and performed on tour throughout England quadrennially, visiting the United Kingdom on nine previous occasions since 1987. In addition to being the first handbell choir to perform at Westminster Abbey, they have played in worship services and in concert at Mannings Heath Village Hall; Bourne Scholl, Southbourn; Royal Festival Hall, London; Ardingly College; Exeter Cathedral; Parish Church of St. Swithun in Woodbury; Bristol Cathedral; St. Mary Redcliffe Church in Bristol; Parish Church of St. Peter in Winchcombe; Gloucester Cathedral; Central Methodist Church in York; York Minster; Canterbury Cathedral; Parish Church of St. Andrew in Nuthurst; Winchester Cathedral; Salisbury Cathedral; the Parish Church of St. Mary in Amport; Christ Church Cathedral in Oxford; St. Mary the Virgin Church in Bathwick; the Collegiate Church of St. Mary in Warwick, United Reformed Church in Stratford-upon Avon; Wells Cathedral, St. Paul’s Covent Garden (The “Actors” Church): Southwark Cathedral; and Coventry Cathedral.

University Christian Church of Fort Worth is situated across the street from the Texas Christian University (TCU) School of Music. Since its founding in 1873, the music ministry has played an integral role in the life of the church. In addition to weekly worship services and special events, the Chancel Choir has enjoyed international and national tours, various concerts in collaboration with TCU choirs, and six holiday concerts with the New York Pops Orchestra at Carnegie Hall. In 2002, the church dedicated a 71-Rank, 4,083 pipe Garland Pipe Organ, which added to and incorporated a previous 56- Rank Reuter Organ. University Christian Church, one of the largest Disciples of Christ congregations in the nation, has a Romanesque style sanctuary that houses a bell tower with four bells cast in Aarle-Rixtel, Holland. The church is home to Fort Worth’s very own Boar’s Head and Yule Log Festival and has been celebrating this Oxford tradition, involving the handbell choirs, for 47 years.