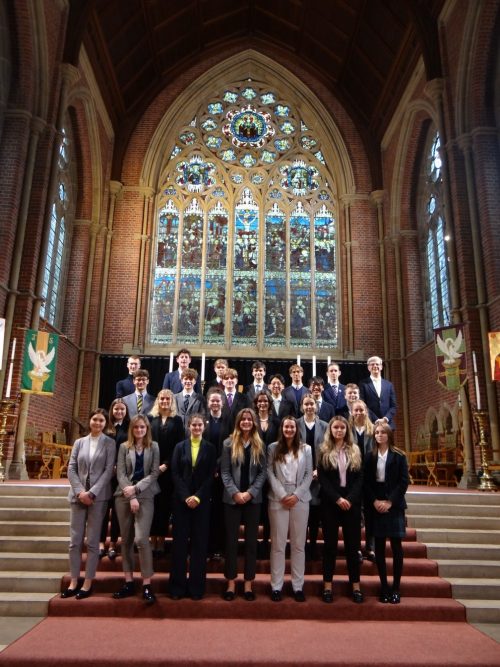 The Schola Cantorum is the chamber choir of Ardingly College, a vocal ensemble that comprises around 24 singers. It includes pupils from all years in the Senior School and explores a wide variety of vocal genres from the Renaissance through to a cappella arrangements of contemporary popular numbers. Schola Cantorum consists of the strongest and most vocally mature singers in the College. Aside from their duties in the Chapel choir, they rehearse twice a week in preparation for regular concerts both at the College and locally, alongside visits to Oxbridge colleges and prestigious cathedrals for Evensong and other services. Annually, there is a choir tour to European destinations, and in recent years the choir have toured Vienna, Prague and Malta.

Starting life in 1858 as Saint Saviour’s College in Shoreham, Ardingly College is one of the original three schools of the Woodard Corporation, a group of schools originally known as the Society of Saint Nicolas, operating in the Anglo-Catholic tradition of the Church of England. Known as a school which places the greatest value on individuals, alumni include former members of parliament, actors, authors, sportsmen, and even an eminent cathedral organist.

Richard Stafford began his musical education as a chorister at Jesus College, Cambridge under the direction of Timothy Byram-Wigfield. Following music scholarships to Eton College and the Perse, he studied at Oriel College, Oxford and upon graduation worked at Wanganui Collegiate School where he studied the organ with Nicholas Grigsby. In 2011, he completed a Masters in Musicology at Durham University with specific study of the composer Gerald Finzi, and whilst there he was the Organ Scholar at University and St. John’s Colleges, studying with Francesca Massey. In September 2012, he took up a post as a teacher of music at Brighton College before becoming Head of Academic Music in 2013. He became Director of Music at Ardingly College in April 2016, where he oversees the direction of the Chapel Choir, Schola Cantorum and Symphony Orchestra. Recent projects have seen performances both at home and abroad with choir tours to Vienna (2017), Prague (2018) and Malta (2019) alongside services in Guildford, St Paul’s and Winchester Cathedrals. He directed the recording of My Lord Has Come, a disc of Christmas music produced for Stone Records in 2018. An annual Winter Concert at the iconic St John Smith Square in London is now part of the regular music provision.