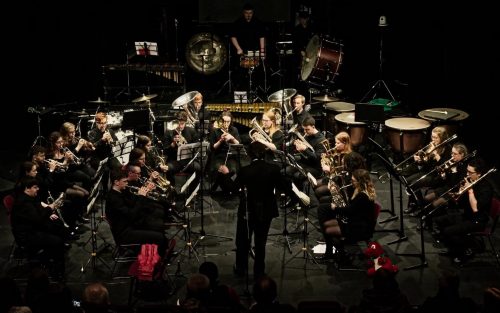 Cardiff University Brass Band Society was formed to create a friendly musical space for brass players at the university to socialise and make great music together.

The band performs in Cardiff regularly and sometimes further afield, with two main concerts each a year as well as many other events such as the SU Fringe Festival, the Cardiff Half Marathon, and sporting events as well as plenty of busking! The band has also competed several times in the National University Brass Band Championships of Great Britain (aka Unibrass), taking them all over the UK to play.

They have had the privilege of working with a number of prominent specialists in the Brass Band world over the years, including Richard Evans (Leyland Band), David Childs, Paul Holland (Flowers Band), Roger Argente (Royal Philharmonic Orchestra & SuperBrass).

The band have moved from strength to strength since their formation and show no sign of slowing down. One of the contest adjudicators’ comments from UniBrass sums up the band’s ethos perfectly: “What was most enjoyable for me here was your spirit and clear enjoyment of what you were all doing.”