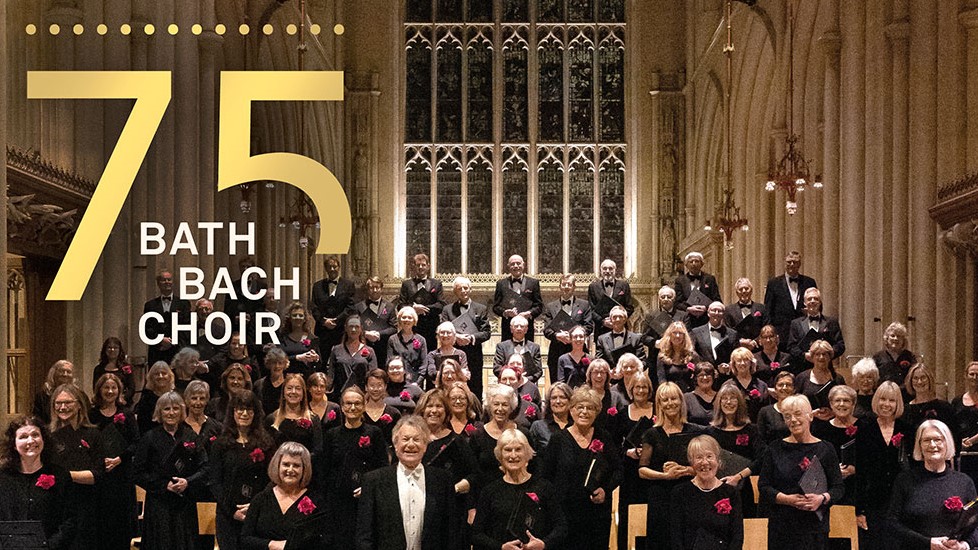 FITTING FINALE FOR CONDUCTOR NIGEL PERRIN AS HE STEPS DOWN AFTER 33 YEARS AS MUSICAL DIRECTOR
Musical fireworks will take place inside Bath Abbey on 5 November 2022, as Bath Bach Choir celebrates its 75th anniversary with a special performance of its signature work, J S Bach’s iconic Mass in B minor. Many consider it the Holy Grail of all choral works, and it was the piece performed at Bath Bach Choir’s inaugural concert in 1947.
The evening will have added poignancy as it will be conductor Nigel Perrin’s final concert with Bath Bach Choir as he steps down after 33 transformative years as its Musical Director.
Of the B minor Mass, which Bach presented to the Elector of Saxony as a portfolio of individual pieces in the hope of securing a post at court, Nigel Perrin says: “It unquestionably demonstrates Bach’s genius in an immense range of styles, from grand chorales to elegant dances, from fiendish fugues to intricate counterpoint. With its scintillating and rhythmically compelling quaver passages and harmonic structures that send shivers down your spine, it’s the ultimate challenge and ambition for all choirs.
“Bath Bach Choir has indulgently allowed me to conduct all my favourite works over the past year, starting with Brahms’ Requiem, then the Rossini Petite Messe Solennelle and finally last July’s superb Monteverdi Vespers with I Fagiolini. With the Bach to finish off the set, I could not imagine a more fulfilling farewell.”
Nigel Perrin has chosen his favourite period orchestra, Margaret Faultless’s brilliant Music for Awhile, to play for the concert; and a cast of international soloists, including Mhairi Lawson, David Allsopp, Frederick Long and Hugo Hymas, will complete the stellar line-up for this landmark performance.
The performance starts at the earlier than usual time of 6.30pm and will finish at approx 8.30pm including a 10-minute interval. A retiring collection will be taken in aid of the Bath Rotary Club’s charities.
Bath Abbey, Saturday 5 November at 6.30pm
Mhairi Lawson soprano
David Allsopp countertenor
Hugo Hymas tenor
Frederick Long bass baritone
Marcus Sealy continuo
Music for Awhile
Leader Margaret Faultless
NIGEL PERRIN CONDUCTOR
Tickets: £28 (£25), £25 (£22), £22, £15, £10
Buy tickets here