Read below to find out about the stories of some of the people who have made history in this holy place. 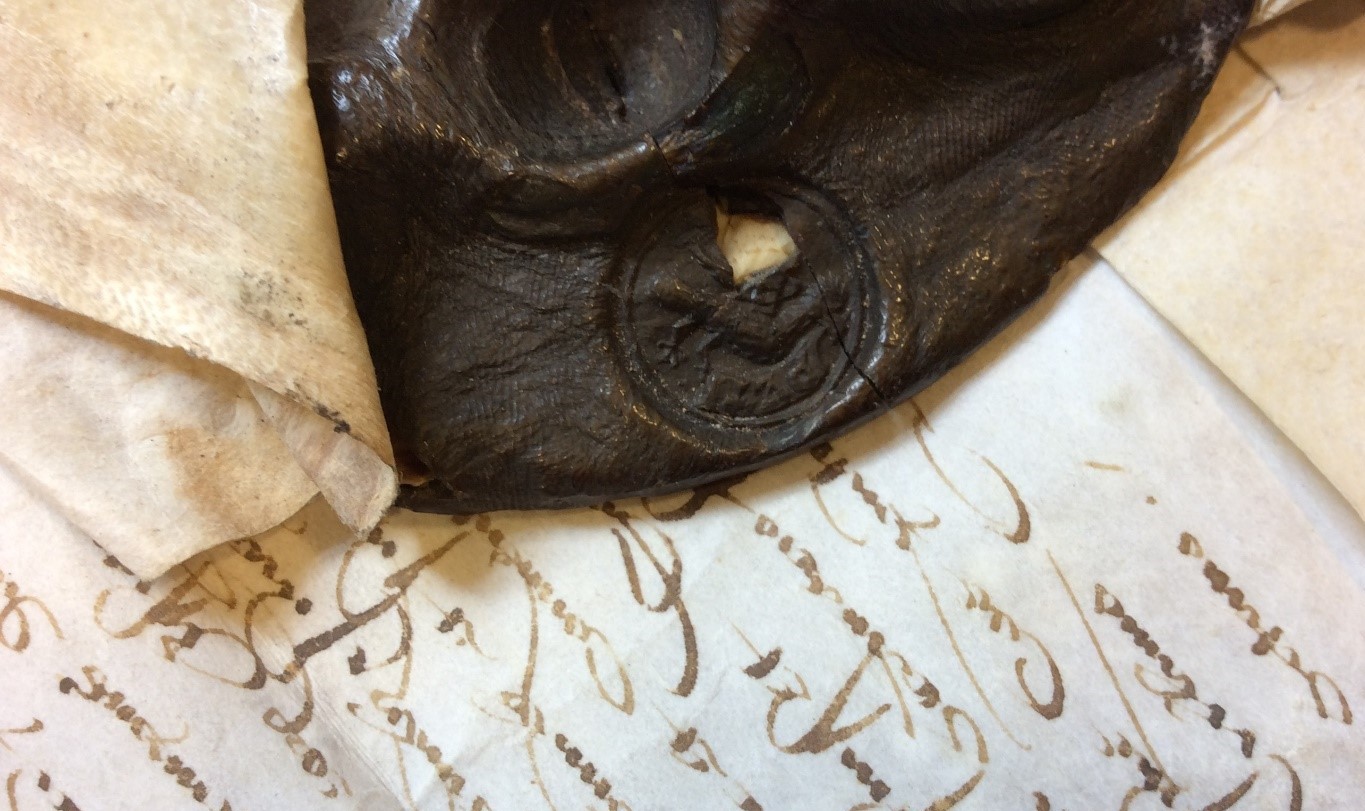 A convent of holy virgins

Bath Abbey first appears in the historical record as early as 675 AD. Osric, an Anglo-Saxon king, gave land near Bath to the Abbess Bertana, to found a "Convent of Holy Virgins". It really is remarkable to think that there was a community of women worshipping on this very site more than 1,300 years ago. It could even be said that our Abbey Girl's Choir is simply continuing a centuries-old choral tradition, which plays a vital part in the musical life of the Abbey and the city of Bath.

King Edgar was crowned King of All England in Bath on Whitsunday 973. The service used for Edgar’s coronation was compiled by Dunstan, who was Archbishop of Canterbury.  The same service has been used at every coronation since.  In 1973, Queen Elizabeth II visited Bath Abbey for a service to mark 1000 years since the coronation of King Edgar. There is a stone commemorating this royal visit on the floor of the Abbey. 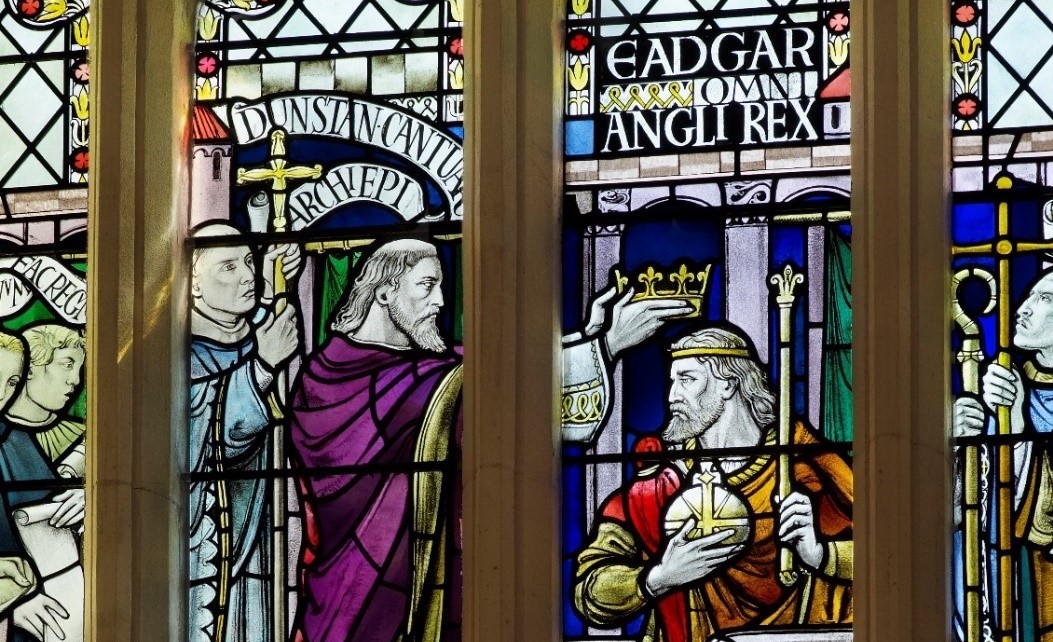 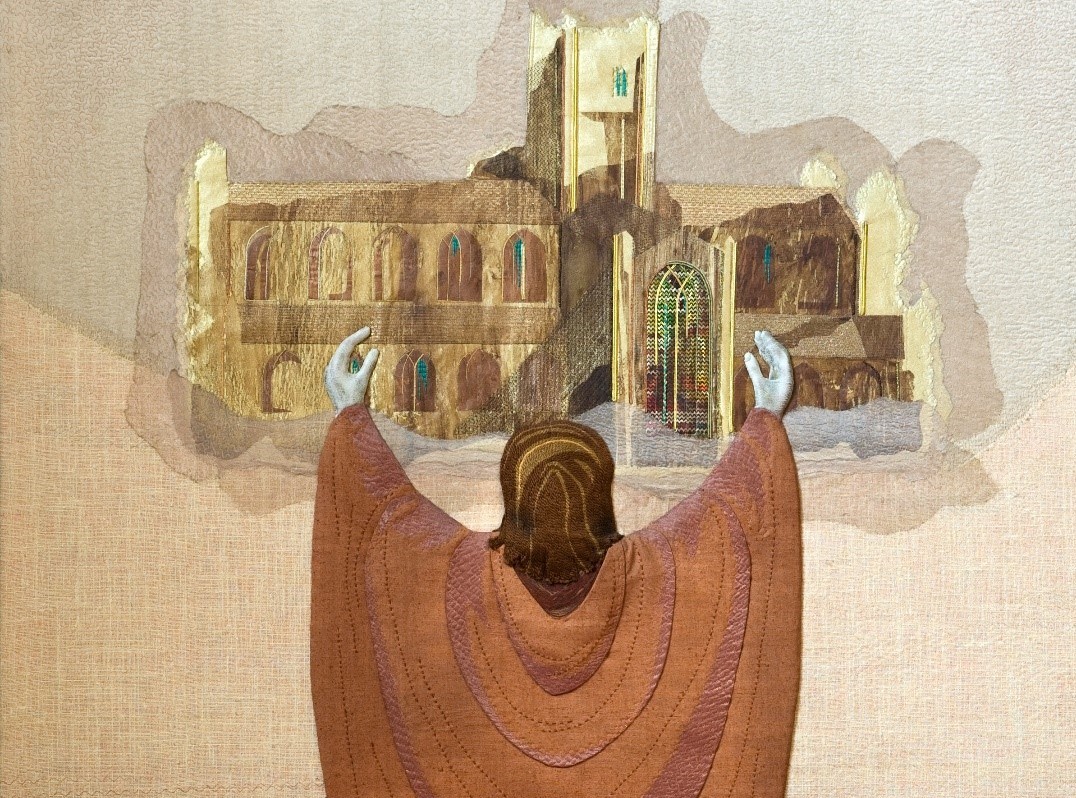 Alphege was an Anglo-Saxon monk from Deerhurst in Gloucestershire, near Bath. He was head of the Abbey in AD 980.

He was famous for following the strict rules of monastic life very closely. He became Bishop of Winchester and then Archbishop of Canterbury in 1005, when he was 52. When Canterbury was invaded by the Danes, they imprisoned Alphege and demanded £3,000 in ransom money. Alphege refused to pay or let his friends pay for him. The Danes were so angry that they clubbed him to death with ox bones. Alphege is a saint because he sacrificed himself for his people.

John of Tours was Bishop of Wells in 1088.  He was granted the city of Bath by King William Rufus.  He decided to move the seat of the bishop to Bath, which was a bigger and more important place.  In 1090, he ordered work to start on a new cathedral, which replaced the Anglo-Saxon Abbey.  John’s cathedral was very large; today’s Abbey would fit inside it.  Most of the old cathedral has disappeared.  This arch is one of the oldest parts of the Abbey.  It is in the Gethsemane chapel. 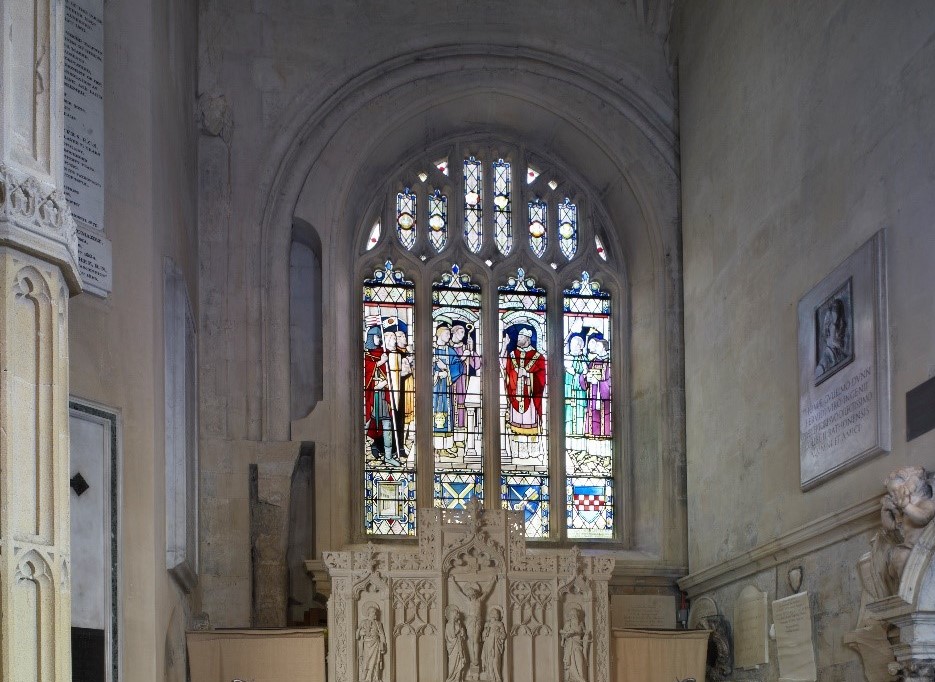 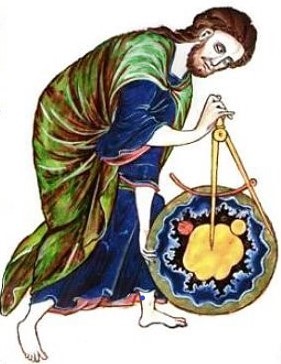 Adelard of Bath has been called ‘the first English scientist’.

Adelard was born in 1080 into a family of good standing in Bath.  His father was from Lorraine and his mother was Anglo-Saxon, from Somerset.

Bishop John of Tours sponsored his education with the Benedictines in Bath.  Adelard studied in Tours and taught in Laon at the Cathedral schools.

He was disenchanted with the poor understanding in Europe of the natural world.  Aware of more enlightened thinking in the Arab world, he travelled to Norman Sicily, a recently conquered Muslim region.

He was inspired to travel to the Levant, Antioch (Turkyie), and probably visited Greece.

He met many Arab scholars in the Levant and learnt Arabic during a 7-year stay.  He collected many Arabic scientific works and translated them into Latin.  These included Euclid’s Elements, use of the Astrolabe and horoscopes.

After his return to Bath, he instructed the future Henry II to be a philosopher-king.  He died in Bath in 1152. 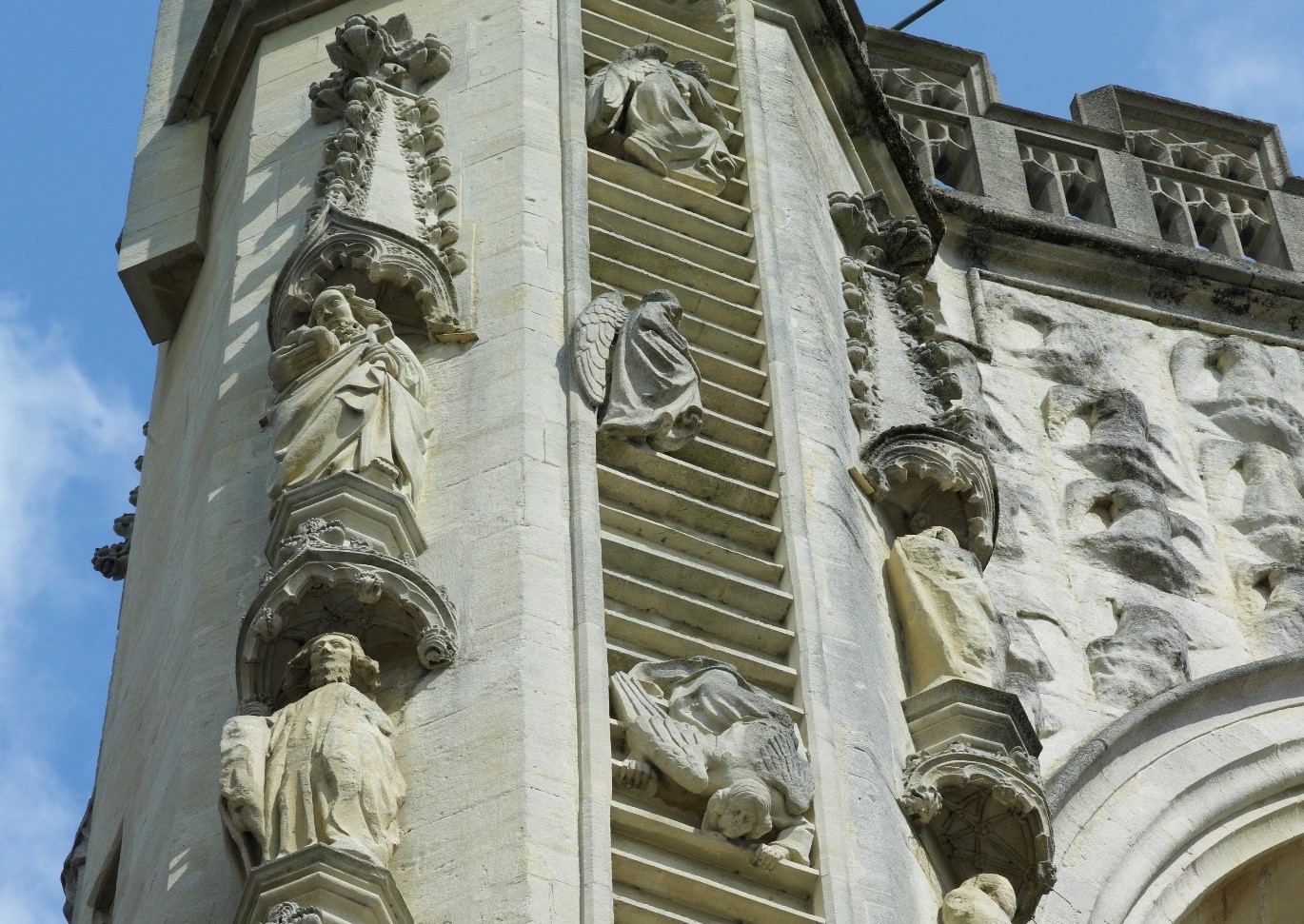 Bishop Oliver King ordered the monks to rebuild the Abbey in 1499. They built a new church on the site of the old cathedral. The cathedral had decayed because the monks did not have enough money to maintain it. Many of the most beautiful parts of today’s Abbey date from this time.

The Abbey is famous for the ladders of angels that climb up and down the West Front. There is a legend that Oliver King had a dream or vision. In this dream, he saw angels, an olive tree and a crown. He heard a voice saying ‘Let an Olive establish a crown and let a King restore the Church.’ The angels on the front of the Abbey are said to refer to this dream.

There is a crown, olive tree, and bishop’s mitre on the West Front in honour of Oliver King.

A beautiful place for prayer

The beautiful Birde Chantry dates from the early sixteenth century. It is used today as a place for private prayer. It is decorated with exquisitely carved letters and birds in honour of William Birde. He was prior (head) of the Abbey. 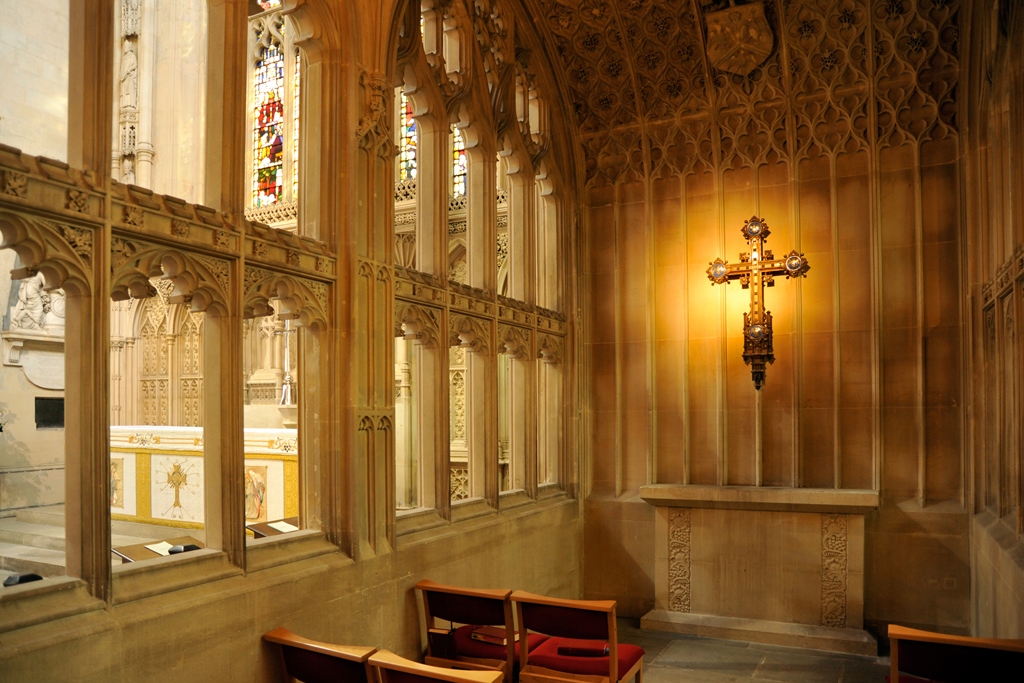 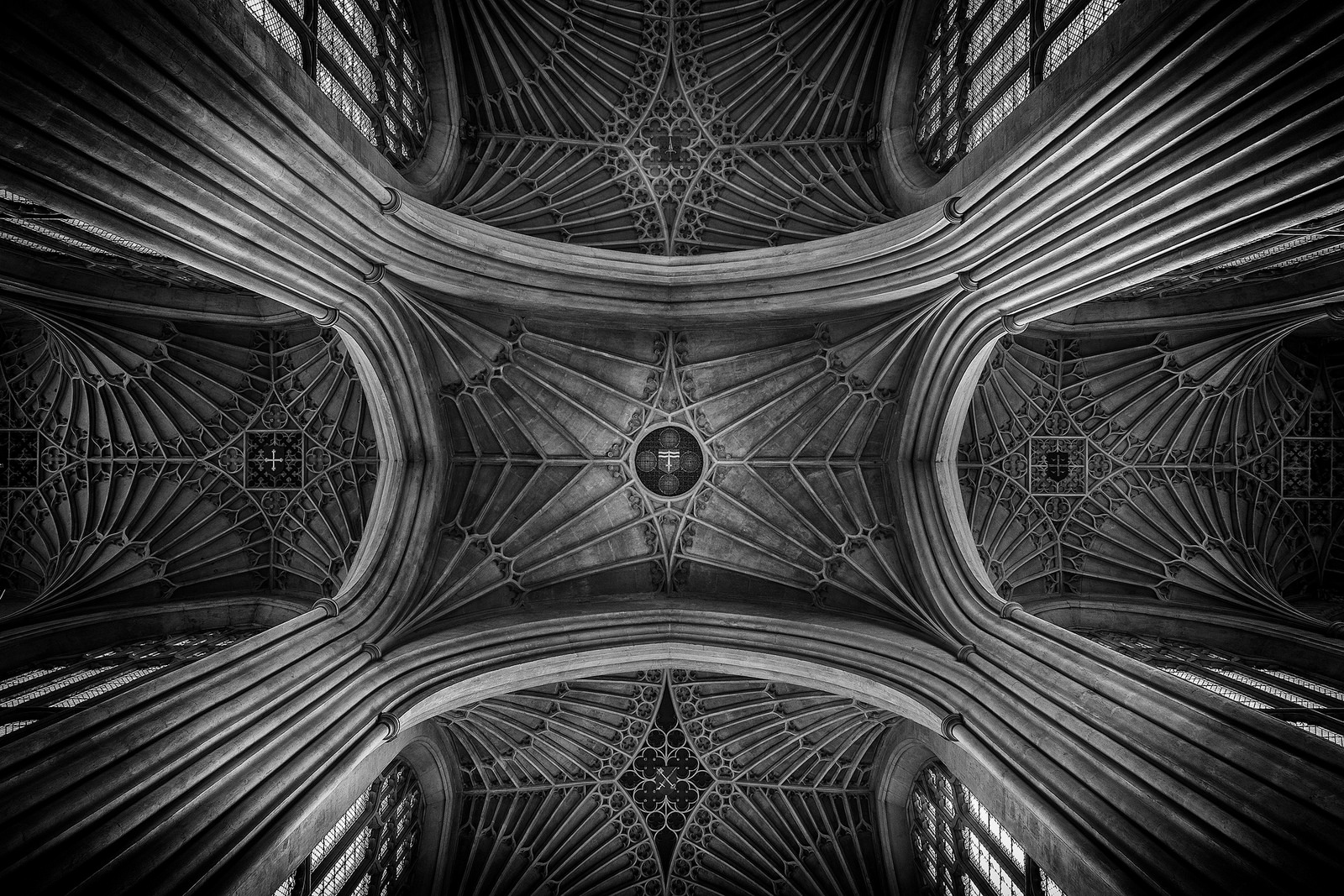 The Abbey’s beautiful ceiling is considered one of the finest examples of fan vaulting in the country. It was built by Henry VII’s builders, the Vertue brothers, Robert and William in the early 1500s. However, it wasn’t finished until the 19th century which is why if you look closely, the ceiling looks slightly different at different ends of the church.

It wasn't just the ceiling that took a long time to complete. Building work on the present Abbey church began around 1499, but it wasn't finished and used as a parish church until 1616. This means it took nearly 120 years from start to finish!

A church for the city of Bath

In the early sixteenth century, King Henry VIII ordered that monasteries should be closed. In 1539, the monks were forced to leave the Abbey and it fell into decay. Thirty years later, the ruined church was given to the city of Bath. Many local people raised money to restore it. The Abbey has a book that lists gifts made to the restoration. It is one of our oldest documents.

The ceiling used to be made of plaster. It was decorated with coats of arms in honour of the people who gave money.

Some of the influential people who were involved in restoring the Abbey include: