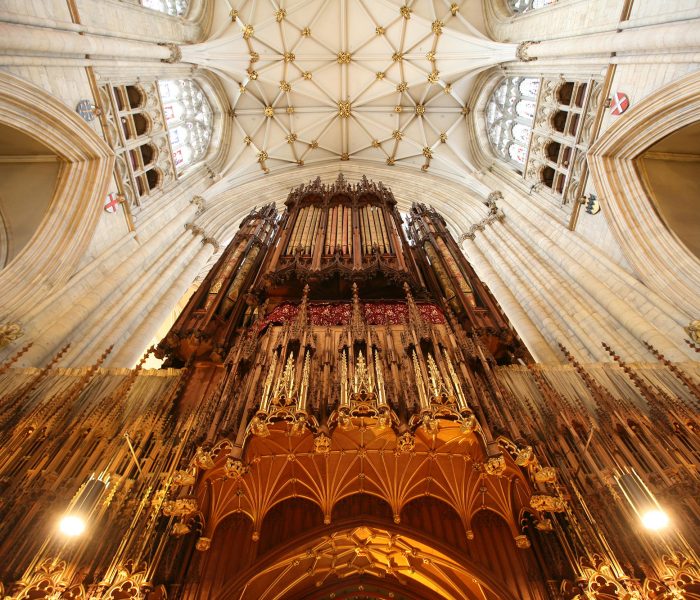 One of Bath Abbey’s choristers, Gavin Phelps, aged 12 from Bath, has been announced as the runner-up in a competition to celebrate the return of York Minster’s Grand Organ, following a £2m refurbishment of the majestic instrument earlier this year.

16 year old Samuel Kemp, from Bushey in Hertfordshire, took first place in the 18 and under category of the Grand Organ Composers’ Competition with his new composition Festival Toccata on ‘In dulci jubilo’ while 12 year old Bathonian, Gavin’s piece ‘Joyful exultation’, impressed judges to claim the runner-up prize.

The competition, which was run in partnership with the Cathedral Music Trust and Banks Music Publications, attracted more than 60 entries from amateur and professional musicians across two categories – aged 19 and over and 18 and under.

Gavin’s composition was premiered at Bath Abbey Choir’s 'A Baroque Christmas' concert on Saturday 18 December, while Samuel’s winning piece will receive its premiere during the Minster’s Nine Lessons and Carol services on 22 and 24 December and the composition will be published by Banks Music Publications.

Both Samuel and Gavin will also receive financial prizes and a masterclass on organ composition with Philip Moore, composer and former York Minster Organist and Master of Music, and Ben Morris, Assistant Director of Music at York Minster.

“It has been fantastic to see the wealth of young talent entering the competition and we’d like to thank everyone for all the work they put into their pieces,” commented Ben Morris, who will play Samuel’s piece at the Nine Lessons and Carols services next week. “The competition has been a celebration not only of the completion of the Grand Organ refurbishment project, but also of the talented young musicians around the country, who will help ensure a bright future for organ music throughout the 21st century.”

Huw Williams, Director of Music at Bath Abbey where Gavin has been a member of the Abbey Boys Choir and the Melody Makers for six years, said: “We are so proud of Gavin’s achievement and send him our heartiest congratulations  We celebrated his success by hearing the world premiere of Joyful Exultation, played by the composer at our Christmas concert on Saturday December 18th at Bath Abbey. The audience were very enthusiastic about the piece and the performance and he received a well-deserved standing ovation."

The winner of the 19 and over category of the competition was announced last month, with the winning entry, Toccata on ‘Wachet Auf’ by David Halls, Director of Music at Salisbury Cathedral, receiving its world premiere at the Minster’s Advent Procession on Sunday 28 November.

The project to refurbish York Minster's Grand Organ started in 2018 and was the first refurbishment of the instrument on this scale since 1903. It involved the removal of the organ, including nearly all of its 5,000 plus pipes, to organ specialists in Durham for cleaning, repair and replacement. The instrument was rebuilt and voiced over several months from summer 2020, before returning to use as part of services in March this year with a formal dedication by the Archbishop of York on Easter Day (Sunday 4 April).