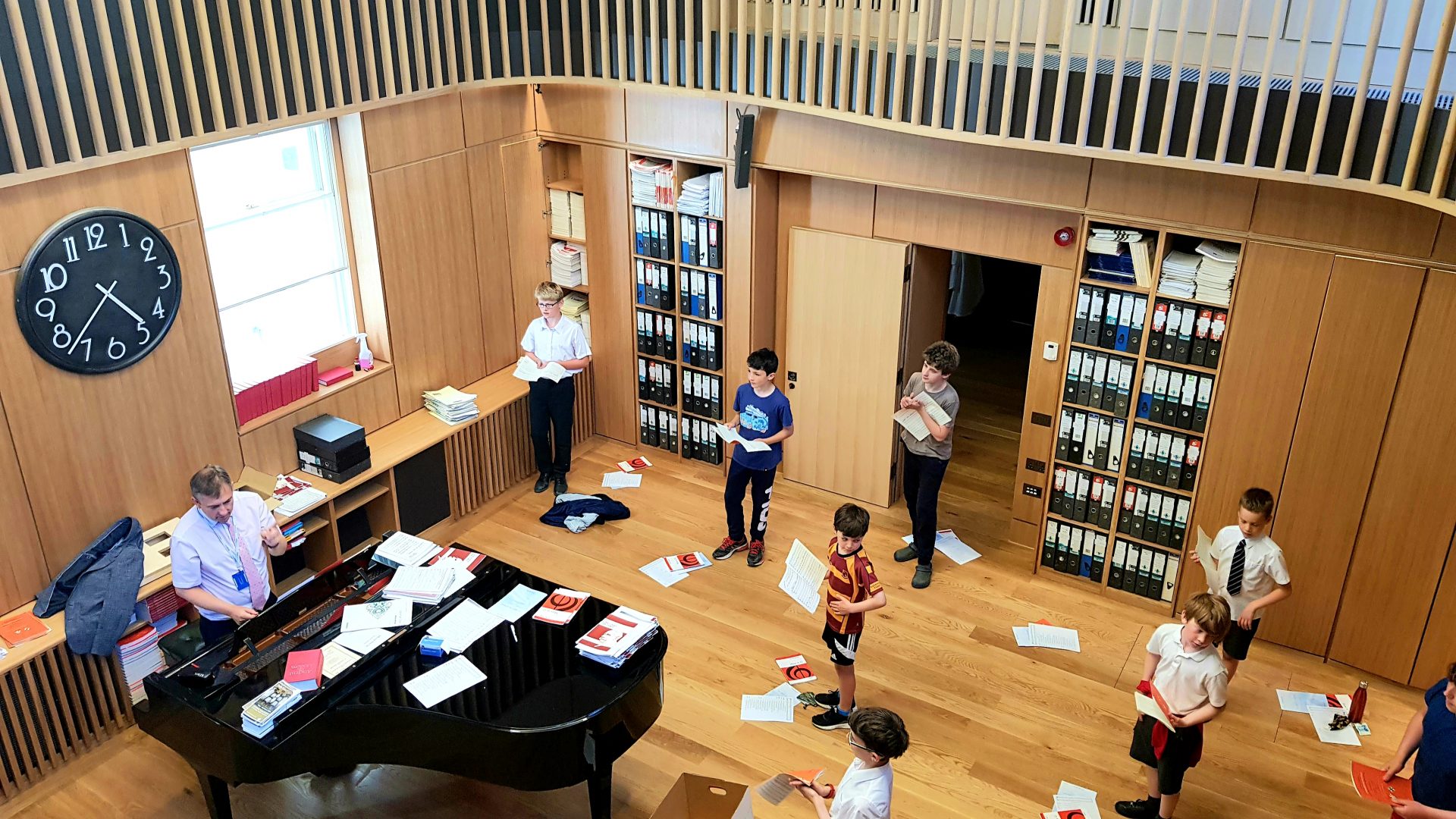 The Bath Abbey Choir has now resumed singing in their new home as another significant milestone in Bath Abbey’s multi-faceted Footprint project was reached.

A new purpose-built Song School for the Abbey’s choirs, visiting choirs and musicians has been in development for the last 2.5 years. These new facilities feature a number of upgrades to the previous Choir vestry including a dedicated rehearsal space, changing rooms and a music library. The main rehearsal room, which is a double-storey oak-lined space, was designed with the necessary acoustics in mind, and will be large enough to comfortably fit 40 people.

Thanks to a project team which includes building contractors, Emery; engineers, Buro Happold; and architects, Feilden Clegg Bradley Studios; the Song School is now completed. It is located in Kingston Buildings, the row of newly refurbished Georgian cottages on the south side of the Abbey, that will also house the church offices, staff and volunteer facilities. These spaces will connect to the Abbey through an underground corridor.

The Abbey is well-known for its choral music with the Abbey Choir at the heart of its worship for centuries. The Choir has undergone major changes over the years, including the addition of a Girls Choir in 1997 and the Men’s Choir changing to Lay-Clerks to include women in 2018, and continues to produce high-quality recordings and to feature on BBC Radio, with strong connections to other music institutions across the globe. The Abbey also often hosts concerts by visiting musicians and performers from around the country as well as abroad throughout the year. At local level it connects with the city’s music and community groups, as well as dozens of local schools through its choral programme.

Huw Williams, Bath Abbey’s Director of Music, said: “The Abbey choirs are very excited to see the completion of the Footprint project. Having been nomadic without our choir room for over 12 months, we are really looking forward to settling into our new Song School. As well as having plenty of light, and good ventilation the specially designed acoustics will inspire us in our daily work. Alongside the main Song School will be the new music office and two dedicated vestries for the adult lay-clerks and the choristers which will be used for robing and relaxing. These glorious spaces will also be used by visiting musicians and choirs performing in the Abbey. The choristers’ vestry will have a piano offering us a new flexibility – enabling us to rehearse smaller groups and soloists separately from the main room. The music library, with its thousands of music scores, will be stored in the Song School in specially built cupboards with acoustically designed doors to create an ideal rehearsing acoustic.”

The Revd Canon Guy Bridgewater, Rector of Bath Abbey said: “It has been such a challenging year for our Choirs, full of stop-starts, yet they have managed to continue to produce beautiful and moving music when it most mattered. We are so pleased that once Covid-19 regulations permit choirs to gather again in person, we can welcome them back to the brand-new Song School. Part of our vision for Footprint was very much to create a welcoming, accessible and inspiring space for all, and this very much includes those who love music, whether it’s performing, for worship, or as part of an audience. Our hope is that our brand new Song School; which will be home for the Abbey’s choirs; will also be where visiting musicians, local community and music groups and schoolchildren can rehearse and be made welcome.”

Alex Morris, Associate, FCBStudios said: “The new choir facilities are part of a series of reimagined spaces, hidden within the interior of the early 19th century Kingston Buildings, that are providing the facilities the Abbey need to deliver its full and varied religious, educational and community programme.  Their refined new interiors have been created from largely redundant previously cramped, dark and damp basement spaces within the Georgian building, to form rehearsal spaces which are generous, warm and light, with acoustic characteristics designed specifically to suit choral music. We hope they will inspire those who use them.”

Ben Bowers from Emery Bros Limited said: “Building the new choir room area for Bath Abbey has been a real privilege. From the initial structural work of creating the space, to fitting the final oak finishes, we have had the pleasure of working with the very best of the South West’s craftspeople on this once-in-a-lifetime project. From the curved oak handrails to the 3 metre diameter ‘Halo’ light, each element has been manufactured and installed to stunning effect. We now look forward to seeing the choir room in use and enjoyed for years to come by the Abbey’s choir and wider community.”

In other exciting updates for Kingston Buildings, the new Abbey offices, volunteer facilities and meeting room have also been completed. The damp-proofing works to the paving of Kingston Parade are also finished and the stone paving has been reinstated with the pedestrian route between Kingston Parade and Orange Grove scheduled to reopen later this summer. A particularly nice addition is that the paving in front of Kingston Parade has been re-laid to include new holes in the pavement to allow light through to the Song School corridor below.

The Abbey’s Footprint project is a £19.3 million programme of work, supported by the National Lottery Heritage Fund, that will provide new spaces for learning, music and interpretation, better visitor facilities, undertake essential conservation work, as well as opportunities for volunteer and community involvement.  It will secure the Abbey’s physical future and improve its hospitality, worship and service to the city. More information can be found on our website: www.bathabbey.org.