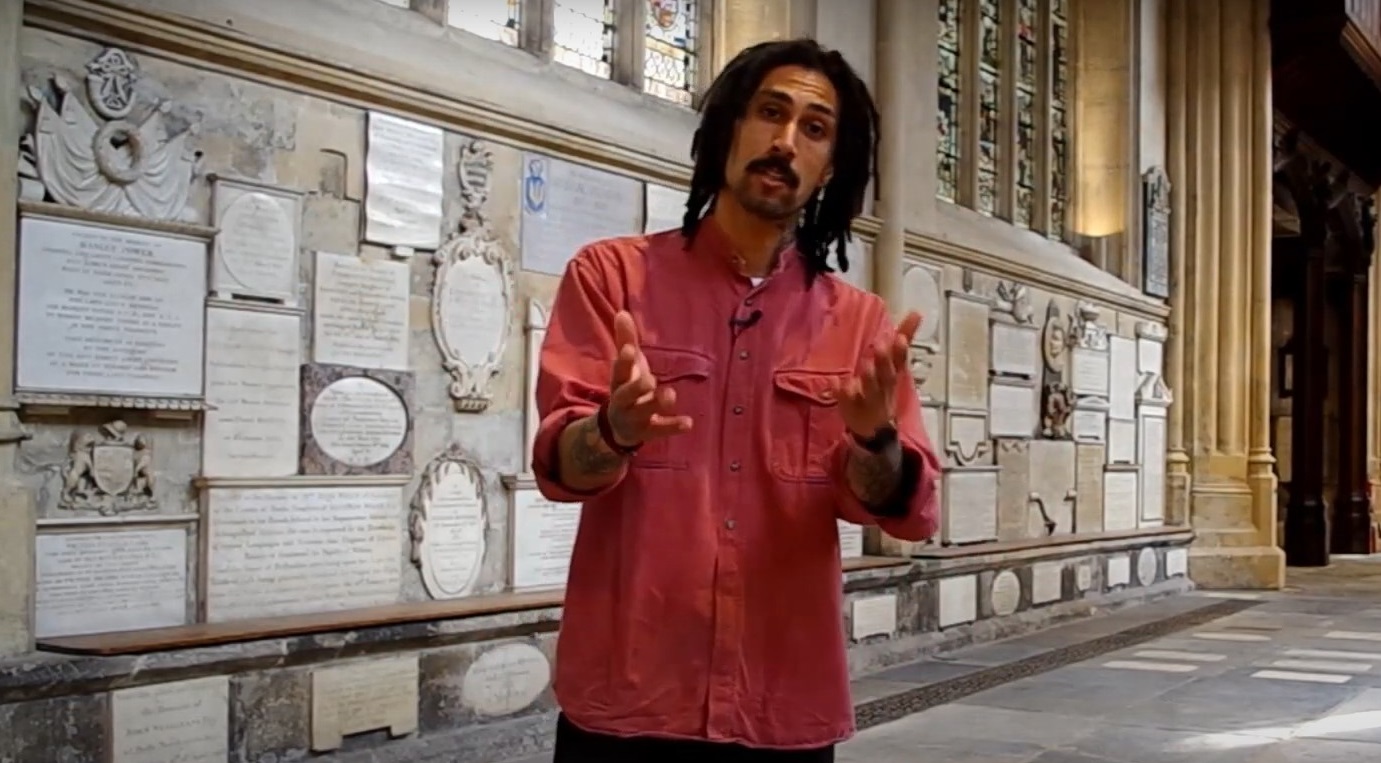 Bath-based poet, Mark De’Lisser, has written a poem, ‘Dark Shadows’, in response to the memorials in Bath Abbey and their links to colonialism and slavery.

You can watch Mark performing his poem here or read it in full on our commitment to racial justice webpage.

Bath Abbey has one of the largest collection of memorial stones of any church in the country – 891 ledgerstones and 635 wall tablets. Dated between 1572-1845, these commemorate around 20% of the approximately 7,000 people buried in the church. Research carried out by the Abbey so far has found over 200 connections with the British Empire including involvement with the Transatlantic slave trade from the 1700s and 1800s, and there is currently an exhibition on at the Abbey which offers a re-evaluation of its memorials in the context of the historical injustices of slavery.

As part of the ‘Monuments, Empire & Slavery’ exhibition, Bath Abbey invited Mark De Lisser to write a poem on his interpretation of the memorials and their links to the past and present.

Mark De’Lisser was inspired to write the poem after a visit to the Abbey during which he spent some time looking at the memorial stones and having conversations with the Abbey’s Learning Team about the Abbey’s historical links to slavery.

Mark explained: “‘Dark Shadows’ is a poem about acceptance, meeting ourselves where we are and moving forward from that place together. Rather than continually turning away and ignoring the parts of our past that make us uncomfortable or uneasy, I wanted ‘Dark Shadows’ to instead invite the audience to feel that discomfort, to re-examine our history and in turn begin to heal the deep wounds that still affect us today.”

Mark added: “Working with the Abbey has been an absolutely fantastic experience. They have been so open and willing to listen to and share the voices of the black community. I really do admire the fact that the Abbey are willing to challenge themselves and look deeply at their connection with the transatlantic slave trade. Hopefully this will inspire other institutions to do the same. In this way we can begin to have open and truthful conversations about Britian’s colonial history.”

Polly Andrews, Bath Abbey’s Learning Officer, said: “We are delighted that Mark has written and performed his personal response to the Abbey’s monuments. ‘Dark Shadows’ movingly conveys the importance of looking closely at the history of Bath Abbey’s memorials. As Mark says, they are “reminding us never to forget or to let go” of past atrocities and the loss of millions of lives for the expansion of the British Empire. Mark’s poem is a powerful call to all of us to examine our “shared history”. Bath Abbey is committed to continue its work to reveal, learn from, and help others understand its colonial past through creative sessions, talks and tours, school workshops and projects with other organisations in the city.”

The Revd Canon Guy Bridgewater, Rector of Bath Abbey, has said: “Slavery should have no place in society, and must be renounced utterly. It is shameful that it was practiced for so long, without effective challenge by church or nation. At Bath Abbey we deeply regret the hateful industry of human exploitation, whether by ignorant complicity or evil design, that certain of our 18th and 19th century memorials make evident.