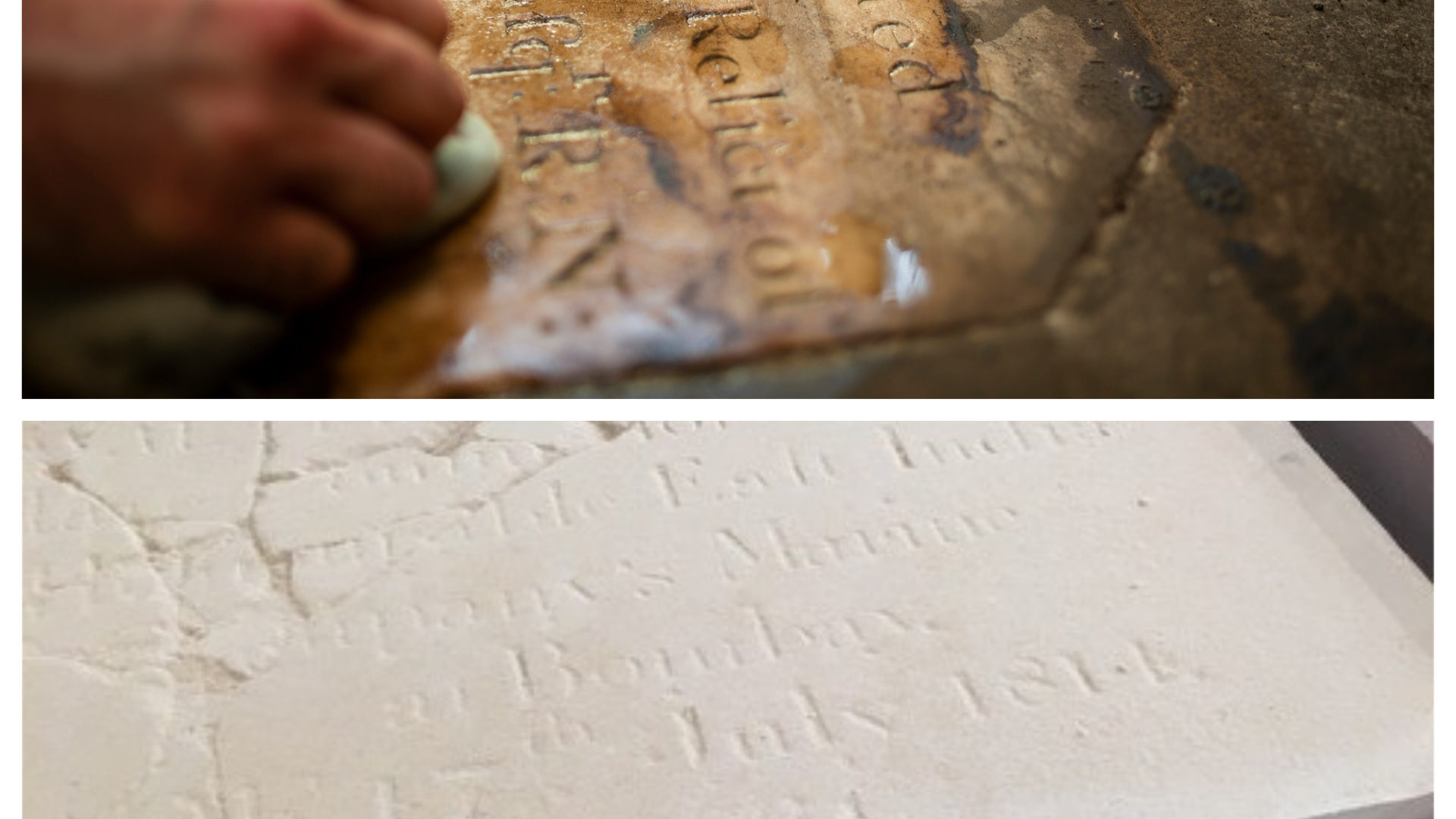 Students and academic staff from the University of West of England (UWE) have been helping Bath Abbey to produce a detailed archive and 3D replicas of the Abbey’s historic ledgerstones.

This research is essential as all 891 ledgerstones that form Bath Abbey’s floor are currently being lifted, restored and replaced as part of the Abbey’s Footprint project to repair the collapsing floor while installing eco-friendly heating using Bath’s hot springs. Many of the ledgerstones which form the Abbey’s floor are presently in a poor state of repair. Some date back to the 17th century and are so fragile that they could disintegrate during removal, making their re-assembly all the more complicated.

The group from the University of West of England (UWE) was able to accurately record the condition of the ledgerstones using a process called photogrammetry, which involves taking a series of photos all the way around the object. Software was then used to transform the images into realistic 3-D models, and some of these models have been successfully “printed” to create physical replicas. At the end of July, these replicas will be on display in the Abbey in a variety of materials – high density foam, MDF, plaster and cement.

David Littlefield, joint leader of the Advance Cultural Studies module at the University of West of England (UWE), said: “Overall, the Abbey is a fascinating place at a crucial moment in its history. We are incredibly grateful to staff for giving us the time to study the Abbey’s floor surface in such detail – the floor is a physical record of Bath’s social history, as well as a changing surface which records its continued use and the central role the Abbey plays in Bath’s cultural and spiritual life. My students, who are from the UK and abroad, consider the time spent at the Abbey to be a rare privilege; and we hope that their work will help in the deeper understanding of this building, and heritage spaces more widely.”

Ollie Taylor, Head of Interpretation, Learning and Engagement at Bath Abbey, said: “This is a great example of combining art, science and technology to assist conservators in a real-life scenario. The students and academic staff from UWE have done a fantastic job of documenting and replicating the Abbey’s ledgerstones. This opportunity also gave the students the chance to encounter the Abbey up close, and many of them formed a very close “bond” with the individual stones they were recording – getting to know the Abbey through developing detailed knowledge of just one very small part of it. While the floor repairs are a crucial part of Footprint, what’s just as important for us is that the project has created opportunities where we can work closely with students and local community groups.”

As part of Phase 2 of Bath Abbey’s Footprint project, part of the Abbey’s nave and crossing will be hidden behind hoardings while essential work to the floor is taking place. The 3D models produced by the group from UWE will be integrated into the hoardings and will be accompanied by text explaining the context and processes involved. In addition, graphic designs by students from Bath Spa University and artwork by the Holburne Museum’s Gardener’s Lodge Art Group will also be on display.