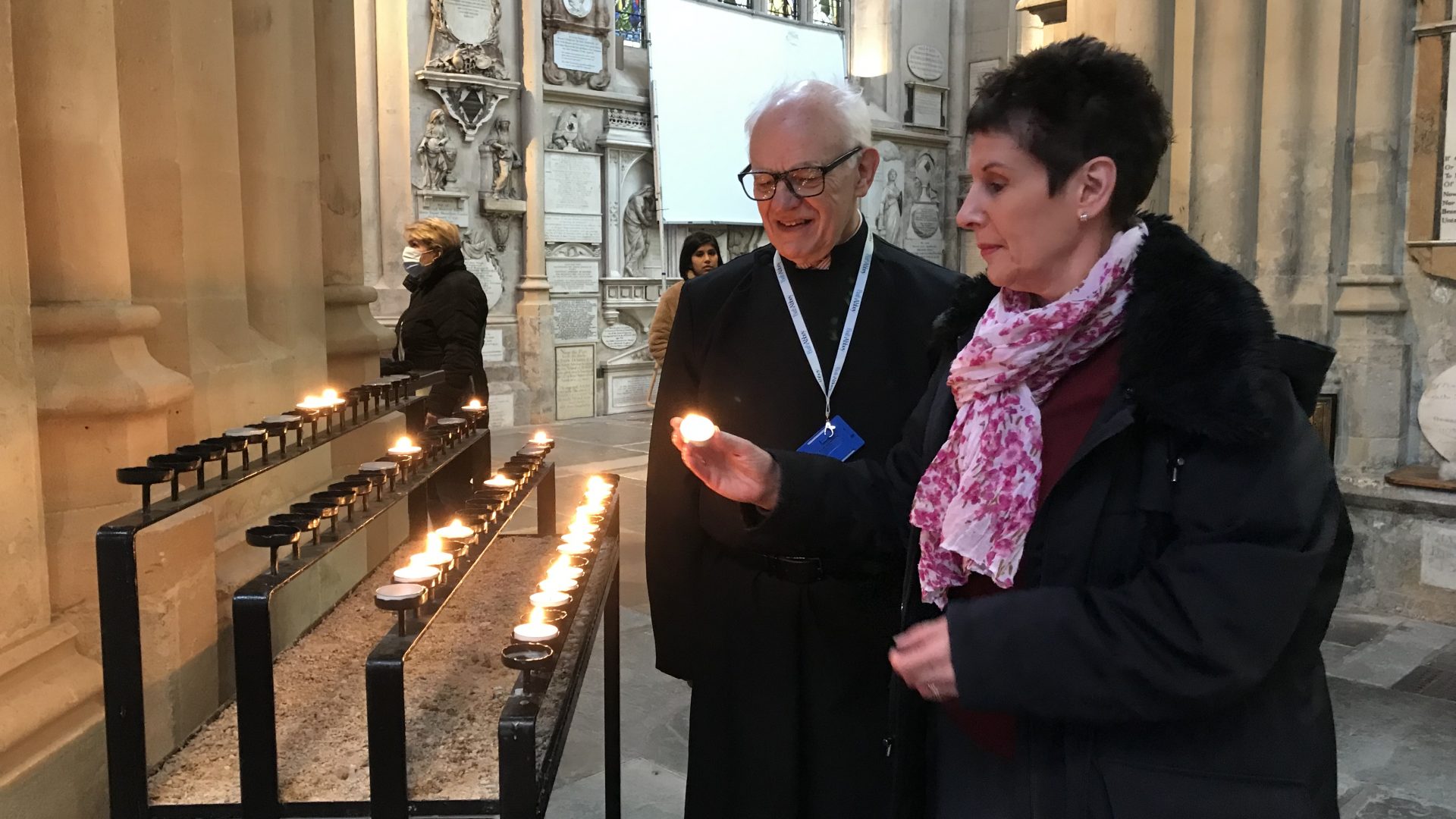 Spotlight on our Volunteers

We are so grateful to our volunteers who support us in simply everything from welcoming visitors to ringing the Abbey bells. In this new 'Spotlight' series we will be chatting to someone from all our different groups of volunteers to find out more about their roles and why they love volunteering at the Abbey.
Today is the turn of our team of Abbey Chaplains represented in this video by Howard Wilkie who fell in love with the Abbey when he was a student at University of Bath, and decades later returns every week to support our visitors with their prayers.
Thank you Howard and all our amazing volunteers. We look forward to getting to know you all better over the next few months

A Chaplain’s Lot - by Howard Wilkie

“It’s a quarter to one on a Tuesday - the regular crowd shuffles in” (with apologies to Billy Joel’s “Piano Man”). In the autumn, it was a great delight to be in the Abbey for the weekly organ recitals. But my main reason for being in the Abbey each Tuesday is to serve as visitor chaplain. Even in these Covidic times, we have seen a steady flow of visitors. Some are local residents, many others hail from elsewhere in Britain. There have also been people from other parts of the world, studying or working here, plus a few overseas tourists. Regardless of belief, social status, language or ethnicity, people are drawn to and amazed by our wonderful building.

So, who are the Visitor Chaplains? Some are regular Abbey worshippers or from the leadership team. Others come from different churches in the City or further away. We are a mixture of ordained and lay ministers. For most of the time that the Abbey is open to the public there is one chaplain on duty - we meet hundreds of different people, but rarely each other! Yet we are part of a large team - welcomers, stewards, the Operations Team, tower tour guides and, as people leave, they encounter Donna’s wonderful staff in the shop.

Almost hourly it is the job of the chaplain to invite everyone to share in a brief moment of quiet and prayer. Then, for the other fifty-seven or so minutes the chaplain is there to listen to and talk with our visitors. The topics they raise are many and various - from last night’s football to “Who is Jesus?” Once I was asked “Can you get married here?”; “My wife won’t let me!” I answered.

Many of our visitors’ questions go beyond those of a mild curiosity. Especially this year, people want to talk about such things as the purpose of living, the loss of friends and relatives, suffering, personal or international peace, faith and spirituality. Some, not always people of faith, ask for prayer, for themselves or others they know. Some will also respond with a faltering but wonderfully sincere prayer of their own - these are such special moments. Lucille, a student from China, had come by train to Bath, having en route to Paddington delivered her MA dissertation. She wanted to know much about what happens in the Abbey and why. She asked for prayer, for she now had to find a job - returning to China was not an option if she wished to retain her freedom.

One Tuesday, as I descended from the pulpit after the 3 o’clock prayers, I was met by four women from the Philippines. One was a Christian, but her heart was broken; fighting back tears, she narrated of how her dearly loved aunt, a great influence in her own life, had been killed in a aircrash in the Philippines the previous day. Getting to the funeral would be impossible - would I pray for her and her family? But as we talked a little more, it transpired that the lady in front of me was herself a staff nurse at Kings College Hospital in London. Two years previously she had been part of the team that nursed my own father in his final few days. All of us cried and smiled as we prayed.

Being a Chaplain in Bath Abbey is such a privilege.